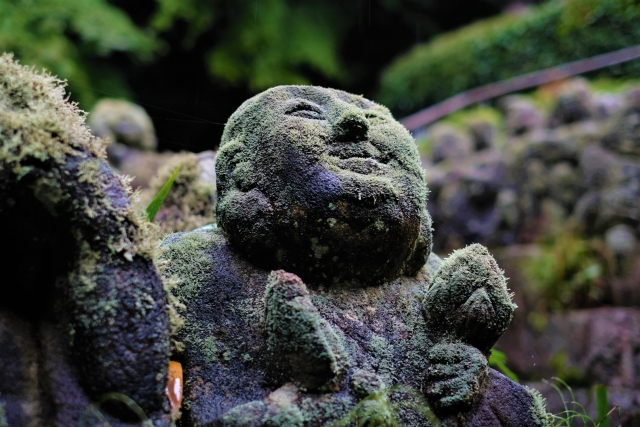 In the past, there were seven main streets connecting Kyoto and its neighboring cities.  The seven connecting points of these streets to Kyoto have been called “Kyo-no-Nanakuchi (seven entrances of Kyoto)”. One of them, “Awataguchi” was the final point of “Tokaido-Gojusantsugi”.  Tokaido was the key road connecting Tokyo (Nihon Bashi Bridge) and Kyoto (Sanjyo Ohashi Bridge).  It still remains as “Awataguchi” at around Sanjo Dori St. where Heian Shrine and Westin Miyako Hotel stand today.

It was the beginning of the 17th century, when smoke started to trail from kilns in Awata area.  Some write about Awatayaki as “the earliest kiln in Kyo-yaki (Kyoto made pottery)”.  It depends on category of the word “Kyo-yaki”, but that’s a bit overstated, I suppose.   However, Awatayaki existed in the very early period of pottery history in Kyoto.  Awatayaki (or Awataguchiyaki) held a large position in a group of works called “Ko-Kiyomizu Ware (old Kiyomizu)”.

Let’s look at it a little closer. Hourin Shoushou (1592?-1668), a head priest of Kinkakuji Temple (The Golden Pavilion) in Kyoto wrote a diary called “Kakumeiki”(1635-1668).  It is only a temple-diary but shows us  a historical material explaining the lives of various groups of people of those days including the Emperor, priests, nobles, samurais, farmer, and the common people. And in this diary, a ceramist called “Sakubei” who lived at Awataguchi or “Awataguchiyaki cha-ire (green-tea caddy)” often appears.  In those days, tea ceremonies were widely held among the upper class societies in Kyoto, and the tea utensils for those ceremonies were made by ceramists of Awata.

Sanmonjiya Kyuuemon, the first ceramist of Awata, is said to have been come from Seto; one of the famous Japanese pottery production area located in current Aichi prefecture.  Therefore, early period of Awatayaki glaze is similar to Seto Ware glaze.  Also, potteries of Shigaraki Utsushi (Shigaraki style) of earthen ware as well as Kohrai Utsushi (Korean style) were made, according to some historical records.

After that period, Nonomura Ninsei played an active part in the pottery history of Kyoto.  According to one of the folklores, he was from northern Kyoto, practiced his skills of throwing wheel  in Awata, and moved to Seto to study the glazing techniques.  Then, he returned to Kyoto and held his own kiln in Omuro area near Ninnaji Temple.  His appearance made a dramatic change to Awatayaki as well as to the history of potteries in Kyoto.  Until his appearance, the Kyo-yaki works (Kyoto Ware including Awatayaki) were only with glaze, or under glaze painting, that is what we call “Sabie-sometsuke”; drawn with rusty color and cobalt blue paint.  Ninsei got technique of over glaze painting using with red, blue, green, purple, glod, and silver colors.  He opened the world of colorful designs in Kyo-yaki.  He is said to be the founder of “Iroe Kyo-yaki (Kyoto Ware with colorful paintings)”.

Historically, as Kyoto had been the capital of Japan for 1100 years, Kyoto had been filled with various crafts, arts and cultures such as Japanese lacquer wares, textiles, drawings, etc.  Such environmental background had given Kyo-yaki various artistic hints in creating new pottery works in Kyoto.  For example, there is one “Jyubako” (Japanese stacking box, usually made by Japanese lacquer ware) made by pottery and decorated with small pattern designs taken from traditional textiles.  We often call such movement as “collaboration” these days, but “collaboration” was popular from the past by Kyoto’s nature of place.

In addition,one of the distinctive features of Awatayaki is that it prospered as a designated kiln for the Shorenin Monzeki temple.  It is one of the very traditional temple in Awata  and every head priest comes from the Emperor family.  Only a few kilns including Awata, they were allowed to draw Imperial crest of the chrysanthemum with 16 leaves.   Even with such a short episode, you’ll know what a magnificent environment Awatayaki had stood on.
On formal wooden boxes for some works made during this period, I have seen the Japanese words, “Yuusoku Touki” (pottery made by highly qualified ceramist).  It is now very rare to see the word “Yuusoku” in Japanese, which implies “this work is made by highly qualified specialists who is aware (or keen) about conventional practice of the Emperor and the nobles”.    From such words written on the formal boxes, I can feel the pride and the sense of responsibility of the Awatayaki ceramists towards their work.

There were many ceramists in this period who were related to Awata.  Eiraku Hohzen, the 11th generation of the very famous Eiraku family, spent his younger days in Awata.  Ninnami Douhachi, the 2nd generation of Takahashi Douhachi, spent his days in Awata before moving to Gojo area in Kyoto.  Ohtagaki Rengetsu, a famous female poet, brought her hand molded works to one of Awata kilns. And, Aoki Mokubei was said to have his kiln where Keage subway station exit exists now.  The 6th Kinkouzan Soubei who is famous in Europe and the U.S. as a potter of Kyo-Satsuma ware was born in Kagiya family of Awata. These people created the second golden times of Kyoto pottery.

There were over twenty large kilns in Awata area, with many ceramists and their craftsmen kneading and molding the clay by throwing wheel and firing it in their own kilns every day.

Meiji revolution made a big change to the history of Awatayaki as well.  Until then, Awatayaki had been producing refined potteries and prospered as designated kilns for the Emperor, the nobles and also military families like Tokugawa shogun.  But from the time of Meiji revolution, patronage of those privileged classes could not expect anymore.  They must find the next market.

At that time, Satsuma Ware made a big success in the world Expo London in 1867. The fact stimulated Awata. Awata adopted Satsuma Ware style and opened its market to overseas for Satsuma was similar to awata’s yellowish body color with fine crackles glaze.   Also, Awata had techniqe of colorful painting with Kyo-yaki style sophisticated designs. They called it “Kyo-Satsuma”.  Kyo-Satsuma did not need much time to become very popular in Europe and America.  They won many big prizes at every world Expo.
This debut of Satsuma ware including Awatayaki in overseas market became one of the stimuli to the world of arts especially in Europe, which was in the middle of its stagnant period.   In those days, many world Expo were held in various places.  Many works of art from Awata including 6th and 7th generation of Kinkouzan Soubei or 9th generation ofTaizan Yohei, were exhibited at these Expos, and received various honors and prizes.  Such development of Awatayaki in overseas markets led to the movements of Japonism and Art Nouveau in later days.

Although Awatayaki became very popular at the beginning of Meiji period, there were some periods when the unchanged old designs, excessively decorated pots and the stains made in the crackles were pointed as defects by some.  It was such time when ceramists researched ways to produce new design of Art Nouveau type or works without crackles.

There is another face of Awatayaki.  Do you ever know that they made cloisonne, too?  It is unexpectedly unknown that Awata Ware kiln also fire cloisonne in Meiji period.  You can find cloisonne made by Kinkouzan or Yasuda in antique shops or auction markets today.  As Kyo-Shippou(cloisonne made in Kyoto), Namikawa Yasuyuki and Inaba Cloisonne(Kin-un-ken) is very famous.  Both of their workshop is in Awata area.  And at some point, ceramic and cloisonne require close skill of glazing.  There might have been mutual technical exchange.  It is rather out of subject but interisting story that today both Kyo-Satsuma and Kyo-Shippou are estimated properly in Europe and the U.S than in Japan.

World Crisis in 1929 (2nd Showa) and two World Wars had fatal impacts on Awatayaki which had many clients in overseas.  My grandfathers’ company, Kyoto Toujiki Goushi Gaisha had its branch offices in BuenosAires Argentine and Shanghai Chaina.  However, every one of them was confiscated at the time of these wars.  (The amount of damage has been said to be 20 million yen at that time.)  In 1953, the company was broken and it meant it  was the end of Awatayaki as an industry.

In Showa after the WWⅡ, two great ceramists, Ito Touzan and Kusube Yaichi succeded the fire of Awata. They were main memberｓ of Nitten, the most popular of all the great art organizations in Japan. Specially, Kusube Yaichi was given the Order of Cultual Merits which is the highest prize for ceramists in Japan, or Jusanmi-prize and sliver cup .

I’m often asked what the features of Awatayaki is.  I say, “Well, the base of Awatayaki is yellowish or gray in body color, and with glaze producing fine crackles. The most popular designs are simple ones like under glaze painting with what we call “Sabie-sometsuke”, drowing the crest of the chrysanthemum with 16 leaves, or ones using green and blue as its basic colors and decorating it with red,  green, blue, and gold colors(Ko-kiyomizu style)” .

However in reality, as I have mentioned previously, there have been various features in different periods in its history such as Seto style glaze, Shigaraki style designs, Satsuma like designs, Art Nouveau types.  Also, there have been non-traditional type works by individual great ceramists.  Every one of them was made in Awata.

What I like the most is Awatayaki from the Edo period with “Saibe-sometsuke”. Underglaze painting is not gorgeous like Kyo-satsuma style.  Indeed, it is very quite simple but has inimitable atomosphere of Japanese common sense of beauty.   I hope to produce works close to the old times of Awatayaki, but it is not easily done.  I feel my works are a little different from the past . . . something is different.  Of course, it is caused by the clay, the kiln or the way I fire them.  But I feel it’s the flow of time and the heart of people that make these differences.  I really feel so.

That was an overall view of 400 years of Awatayaki’s story.  The more I learn about it , the more I feel it’s hard to explain it in one word.